An Analogy About the Correlation Program

One of my many academic degrees (too many) is in Film Studies. A few weeks ago, a friend of mine (who happens to be an ex-Mormon) had seen an indie film that she absolutely loved, but which wasn't in wide theatrical release and wasn't making very much money. She messaged me on Facebook to ask me whether my film studies classes discussed why mediocre or awful movies make a ton of money while truly good films often fail to turn a profit. The other day, I happened to re-read my reply to her because I was sending a message to her on Facebook. I was somewhat amused by it and since it was relevant to the content of this blog, I thought I'd re-post it here.

What really is to blame for the fact that truly good movies (the ones that challenge our thinking and broaden our perceptions of the world) consistently fail to rise to the top of the box office while the Shrek 2s and Transformer 2s of the world take their place as all-time box office record-setters? We do explore questions related to this in film classes. It's a complicated question to answer because it takes a certain level of knowledge about film history and the mechanics of the current film industry.

My personal theory is that capitalism is to blame. For example, let's take your average big-budget, A-list Hollywood movies---the ones with all the expensive marketing designed to get butts into seats on opening night. These movies are calculated to appeal to large numbers of people (the mainstream movie-goer), which means they must appeal to the lowest common denominator of audiences who buy movie tickets. (Typically, the lowest common denominator is the pre-pubescent teen male. If the low brow, young male audience likes it, producers are willing to take a gamble that it will be broadly accessible to other audiences too.) 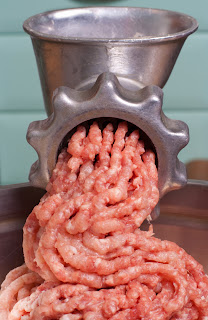 What that means that nearly every film goes through the "sausage machine" of Hollywood before it makes it to the theater. Producers usually reject original properties for tried-and-true standards with built-in audiences. ("Yay! Another Twilight or comic book movie!") Screenplays get all their originality edited out. ("We musn't offend!") And films get screened before test audiences and edited like crazy until they barely resemble the original screenplay. Then, they market the hell out of them. Because they know that even films that pretty much suck will still turn a decent profit after making the full rounds in international theaters and DVD sales (Tron 2, anyone?)---as long as they get enough butts into seats on opening weekend, since that's the only real benchmark of success. They don't care if you brought your mind into the theater with you or not. All that matters is whether you brought your wallet.

The best analogy I can make about this process is to compare it to the church's Correlation program. Anything weird or quirky about church history or doctrine gets edited out over time to appeal to the lowest common denominator: the new convert or investigator. Anything that goes through the sausage machine of Correlation comes out looking clean, orderly, and entirely unoffensive---but ultimately empty. But that doesn't matter as long as your butt's in the pews on Sundays. (Oh, and that you brought your tithing slip with you. Downtown malls don't build themselves, you know!)

Both Hollywood and the church think that we're happy to have a diet of popcorn and soda (because that's what test audiences have told them they prefer). But everybody knows this diet is neither sustaining nor satisfying. And those audiences/church members that are smart enough to realize it are finding other ways to fill the void. The real threat to Hollywood isn't pirated DVDs. And the real threat to Mormonism isn't "anti-Mormon literature." (Notice that both of these threats share the Internet in common.) The real threat is the system itself---and the empty sense of dissatisfaction created by its own hollow lack of substance.

In all seriousness, the correlation program is pretty close to being at the top of my list of deeply felt concerns about the church. I literally wept while listening to Part 2 of Daymon Smith's Mormon Stories interview in which he described his dissertation about the Correlation program. It's hard to describe why it made me so emotional, but it bothered me on a very personal, gut level. It felt like the Correlation program was almost intentionally designed to make the church a place that was inhospitable to intellectuals like me. It made me feel profoundly alienated and alone.

And it furthermore made me realize that the church wasn't the way it is today as the result of any kind of calculated conspiracy by the individuals at the top. (Not that I ever really believed it was anyhow.) Rather, the fault lies in the institutional system itself. I recognize that nearly every institution is deliberately created by human beings to serve some noble purpose or meet a need of some kind (Correlation included). But after a point, most institutional systems begin to take on a life of their own, transcending and defying the conscious intentions of any individuals that belong to the institution. That's what the Correlation program has become. To state it bluntly, I feel that it is an anti-intellectual, patriarchal force designed to keep church members under control by shutting down any productive, evidence-based dialogues that could effect change (and thereby potentially threaten the organization in its current form). It is the institutional system itself that is reprobate.

Up to that point (this was around the summer of 2010), I had believed I could find a way to remain in the church even though I no longer accepted its truth claims. I felt that perhaps I could be a catalyst for positive cultural change in my own small way. But the more I learned about the Correlation program and its incredibly far reach, the more I began to realize that trying to be a change agent in the church was like being Don Quixote. I do admit there is a certain beauty in the quixotic pursuit of noble, foolishly impossible dreams. And in that same vein, I actually have a lot of admiration for people who preach the gospel of Middle Way Mormonism. But at the end of the day, I think it's absurd to try to fight a windmill. And my level of tolerance for the absurd is fairly low these days.
Posted by Oxymormon Girl at Friday, June 15, 2012

The blog you are viewing is written by an inactive member of the LDS religion who was once a fully believing Mormon but eventually lost her faith. As such, this blog is not intended to be read by faithful Mormons. This blog contains perspectives that are skeptical of Mormon doctrine and are critical of the way in which the LDS Church presents church history to its members. It will also occasionally criticize mainstream Mormon culture and its leaders.

This blog is in no way meant to be hostile to members of the LDS religion and its purpose is not to destroy the faith of believing Mormons. Rather, this blog is merely a means of self-expression for the blog author and is intended to provide social support to other individuals who have already lost their faith in Mormonism or are highly skeptical of its truth claims. If you disagree with or feel personally threatened by these perspectives, you should not read this blog.

By clicking the OK button when you first visited the site, you signified that you understand the stated purpose of the blog and that you will not defame the character of the blog author as being an enemy to Mormonism. The author of this blog wishes to remind you that just because people might disagree with your perspectives, that does not automatically make them your enemy nor does it mean they hate you. Life is certainly more complex and nuanced than that.

Some of My Favorite Oxymormon Girl Posts

I'm an inactive Mormon who lives in Utah County. I stopped believing in the church because it no longer made sense to me on a rational level. I'm a mom, but I also have a career as an academic.

I was still an active Mormon and partially believing member when I first started this blog. At that time, my calling was as the 2nd Sunday Relief Society teacher. This blog is devoted to exploring the contradictions between what I used to say when I taught my lessons in church (even though I didn't believe) and what I really think. I also occasionally blog about my thoughts and experiences as I have left Mormonism. I write approximately 2 blog entries a month (and I should warn you that they're usually very long). See my blog entry About Me and My Blog for more details.

Both love and hate mail is expected. Feel free to email me. Be aware I take forever to respond to almost anyone. Also, I probably won't respond to trolls and flamers, but you're welcome to vent anyway.